Göbekli Tepe and the Mystery of History

In my homage to Edwin Hubble I spoke of world-shattering discoveries that force us to rewrite previously established notions we have about reality. Hubble’s discovery—that nebulae were actually other galaxies far beyond our own Milky Way--persuaded astronomers to scrap the “island-universe” model we previously employed in favor of the “big fuckin’ universe” model we currently hold.

Recent archeological findings in Turkey could do to our model of human history what Hubble’s discovery did to the “island-universe” theory back in 1934. The idea that the oldest civilizations on earth date back to no later than 6,000 BCE could be seriously damaged by these new discoveries, opening the door to a variety of fringe theories which have, until now, been treated with scorn or dismissed out of hand by mainstream academics.

The consensus is that humans came on the scene around 2 million years ago in Africa. They eventually wandered out of the Olduvai Gorge in small groups of hunter-gatherers and spread out across Europe, the Middle-East, and Asia before crossing the Bering Strait to the Americas.

The hunter-gatherer lifestyle isn't conducive to technological advancement so for the bulk of our 2 million year existence human innovation consisted of mastering fire and simple tool-making. Then, around 12,000 years ago, people discovered agriculture and animal husbandry, kicking off the Neolithic Revolution and the dawn of sedentary life.

This is how human civilisation was born.

According to this narrative the first cities arose in the Fertile Crescent around 6,000 BCE. The Bronze Age started around 4,000 BCE, bringing with it knowledge of metallurgy and writing as well as the establishment of trade routes in the Near East. Phase one of Stonehenge was finished around 3,100 BCE, the Great Pyramid was completed on 2,560 BCE, and work on the Great Wall of China was underway in 700 BCE.

This narrative implies that the appearance and advancement of civilisation is only possible after agriculture arrives on the scene. Before the Neolithic Revolution, people were too busy chasing their next meal and surviving the elements to start experimenting with metallurgy, masonry, or large-scale construction.  Being scattered across the globe in small groups, humans could never mobilise a workforce large enough to build the megaliths of ancient times.

Sitting atop a mountain ridge in Turkey, the site was discovered in the 1960's and left untouched until 1994 when a team of German archaeologists led by Klaus Schmidt started digging down into the hill. According to one Stanford professor, what these archaeologists found "changes everything." The oldest part of Gobekli Tepe consists of T-shaped stone pillars arranged in a circle. Each pillar measures twenty feet in height and weighs 20 tons. There are more than 200 pillars arranged in about 20 circles and each pillar is fitted into sockets that were hewn out of the bedrock. The second and newest phase consists of smaller pillars set in rectangular rooms furbished with polished lime floors.

Now Gobekli Tepe isn't unique or unrivalled in terms of size, scope, or engineering. In fact it is comparable to Stonehenge, whose outer circle uses stones which are slightly larger than those used in Gobekli Tepe's first phase.

The thing that makes Gobekli Tepe stand out is its age. According to radiocarbon dating, the oldest portion is in the neighbourhood of 12,000 years old.

That's roughly 4,000 years before the first human settlements appear on the scene. That's before metal tools or wheels or domesticated horses. How Göbekli Tepe's builders amassed a workforce, cut the stones in the nearby quarry, hauled them uphill, and arranged them in a circle, is a mystery. 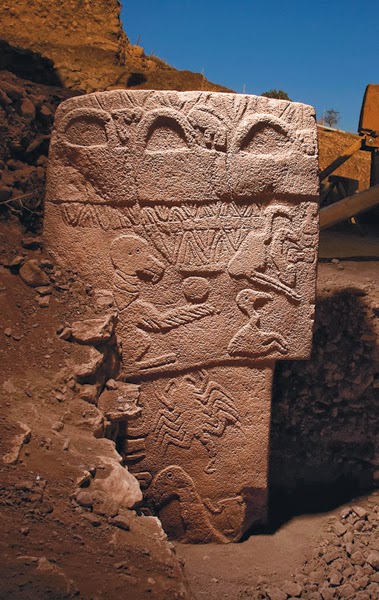 Göbekli Tepe's purpose is also a mystery, though slightly less so.

Excavations have revealed little proof of permanent habitation. A variety of animals, some local, some exotic, were carved onto the pillars. The workmanship is impressive too, especially considering they lacked experience in stone working and possessed only flint tools.

Another clue is the presence of butchered animal bones, present in large numbers at the site.

Schmidt believes Göbekli Tepe was a stone-age mountain sanctuary, a site of ritualistic, spiritual, or maybe even religious importance. It may have served as an annual meeting place for local groups of hunter-gatherers, a place for them to celebrate some forgotten holiday.

In order to make sense of Göbekli Tepe scholars will have to review the accepted chronology of human existence. In doing so, I hope they take a second-look at some of the other theories they rejected on the basis of the Neolithic Revolution. The notion that humans were incapable of advanced construction before the appearance of sedentary civilisations is clearly wrong; Göbekli Tepe proves that.

Either our prehistoric ancestors were more advanced and resourceful than we thought, or else we must look for alternate means of explaining Göbekli Tepe. No, I don't subscribe to the ancient astronaut theory but I think the idea of a lost civilisation merits further inquiry.

The concept may sound fantastical but it actually isn't that far-fetched.

Look at the current state of our species. Smartphones, solar power, jets, space-flight, hydrogen bombs, the Large Haldron Collider: we achieved this level of technology in a mere 12,000 year period. How many times might we have achieved similar levels sophistication in the past 200,000 years?

All it takes is a well-placed asteroid or global catastrophe, the near-extinction of our species, and 30,000 years for Mother Earth to bury the evidence. The lucky survivors would revert back to primitive life in a few generations, carrying with them tales of this prehistoric doomsday in the form of myths and legends.

I won't plead my case for the "False Start Hypothesis" here as it merits its own post. Consider this a primer. Like Hubble's discovery, Gobleki Tepe forces us to question notions we accepted as truth. There's more to prehistory than we know, just like there's more to the universe than our Milky Way.

The more we learn, the more we realise we don't know a whole lot. We've got records going back 6,000 years but we've been around for hundreds of thousands of years. Think of human history as a puzzle. Gobekli Tepe is the missing piece we didn't know existed. Fitting it into the puzzle will require us to take other pieces out, rearranging them if we can, discarding them if we can't.

How many more such pieces are scattered across the globe, waiting to be discovered? And what will human history look like once we find more of them?

I get excited just thinking about!
Posted by Ollie at 7:27 AM

Email ThisBlogThis!Share to TwitterShare to FacebookShare to Pinterest
Labels: History